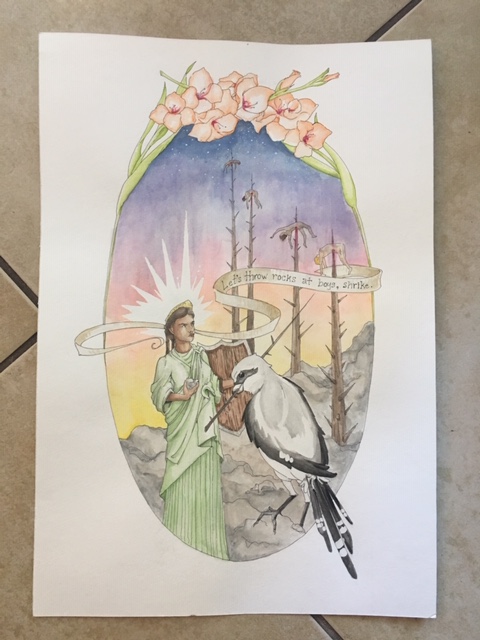 Last Fall I decided I wanted to take a class on Illustrating to get more motivated and consistent with making ‘art’. Our first project asked students to come up with a phrase, write it down on a sheet of paper, throw it into a hat, and then that would become the prompt for another student’s assignment.

The phrase I received was: “Let’s throw rocks at boys shrike”

Honestly, I had no idea what to make of this – I thought maybe this is a pop-culture reference (most of the students in the class were at least a decade younger than me, so the probability was high). I Googled it and couldn’t come up with much. However, I did discover what a Shrike is (a bird that impales it’s pray) and with some of the current news and activist efforts I participate in, I decided to make some Art.

It was my first time using watercolor resist, which is super cool! I’m really happy with how the piece turned out from a technical perspective. I used Gladiolus flowers because they represent strength of character and morality. But in retrospect I think the symbolism should have swayed more towards the concept of Justice vs. Liberty to more accurately portray the ideas of inequality and the pervasive misogyny in America.